The 43 pages of Order 739 are constituted of eight chapters:

Comparing Order 680 with Order 739, the later consists of 107 articles, 27 newly added and 70 modified. While Order 739 follows most of the legislative structure of Order 680, the underlying regulatory philosophy has become more progressive, marking the beginning of China’s medical device regulatory reform.

Order 739 implements an MAH regime for medical devices with major implications for developers (research institutions and companies) who have limited manufacturing capabilities. Developers may now focus on product R&D with ownership and control of marketing and outsourced production to one or multiple qualified contract manufacturing organization(s). This continued rollout is one effective way to incentivize research institutions and IVD/medical device Sponsors to develop innovative products within the Chinese marketplace with robust and fundamental support of the national government. However, it is worthy to note that MAHs bear the responsibilities of the safety and effectiveness of devices during the entire product lifecycle.

As a result, NAMSA anticipates that resource allocation within industry will be optimized through New Order 739. Additionally, MAH policy enables R&D departments to concentrate on prototype development and innovation while contract manufacturers will serve a major role within manufacturing and QMS compliance.

The National Medical Products Administration (NMPA) initiated this MAH Pilot Program in 2017 with Shanghai, Guangdong and Tianjin acting as the first trial locations. After great progress of regional implementation, NMPA extended the pilot program to another 18 provinces in China in 2019. This policy has achieved laudable achievements from its implementation and was formalized into the Articles of Order 739.

One of the remarkable strengths throughout Order 739 is the continued encouragement of future innovation. Articles eight and nine declare that the national body will promulgate an industry plan of medical devices to prioritize innovation into development. The intent is to fully support innovation from different aspects, including R&D funding, government bidding and procurement and medical insurance reimbursement. Any “Innovation Device” is eligible to win priority review and expedited access to the China market.

An Innovation Device is defined as a ‘product with cutting edge technology, significant clinical application and its own China patent.’ These device types can begin China Innovative Device application without the approval of the country-of-origin. [Note: one normal imported registration of a non-innovative device should have pre-existing marketing authorization from the country-of-origin for NMPA submission (Article 15).] An implication of this reform is that NMPA offers equal opportunity between a foreign company and a domestic company. Because of this, an overseas company can synchronize the marketing access of its innovative product at least in the country of origin and in China.

NMPA does not mandate any specific type of testing to a NMPA certified Type Testing Center per Order 739 (Article 13), which was previously mandatory per Order 680. An overseas manufacturer can either perform the type testing by itself or optionally choose one Type Testing Center to perform the test as of June 1, 2021. NMPA will issue a technical guidance on how to perform type testing by a manufacturer and how to develop the type testing report to support and supplement this significant initiative in the near future.

An implication of this reform is that NMPA provides more flexible paths of type testing to the industry and it becomes more important for overseas manufacturers to deeply understand China national and industry standards. Overseas manufacturers should keep an eye on China standardization to ensure continued compliance. It is unclear at the moment how the self-type testing process will be implemented in practice and to what extent companies will benefit.

Order 739 will allow versatile clinical evidence to support product safety and effectiveness. Such evaluations can be based on clinical trial data and/or analysis of clinical literature and clinical data on predicate devices. One of the most notable changes is that NMPA is bringing new flexibility to clinical evidence pathways.

Per Article 25, conducting a clinical trial for a device is based on pre-analysis on the existing non-clinical trial data (i.e., an official clinical trial for NMPA registration purposes). If data is inadequate to support product safety and effectiveness, the clinical evaluation can only be based on clinical scientific data (for instance, internal and/or external, published and/ or non-published clinical data). However, NMPA released a catalogue of six class III categories of medical devices mandating clinical trials on Sep 18, 2020 (NMPA Notification No. 61, 2020)), including some high-risk implantable devices. These include, but are not limited to, implantable cardiac pacemakers, implantable cardiac defibrillators, implementable blood pumps, implantable drug infusion pumps, artificial heart valves and stents.

Article 29 of Order 739 reflects that NMPA also provides new flexibility in relation to medical devices used to treat life-threatening diseases. Expanded use (sympathetic use) means investigational devices that are undergoing clinical trials for severely life-threatening diseases without effective treatments could potentially be offered to other non-enrolled patients with these conditions; this patient data can be used to support NMPA registration.

– Conditional approvals will be made available for devices treating rare diseases, or orphan indications, as well as life-threatening diseases that do not have an effective treatment method or that are utilized in response to public health emergencies. These devices are eligible for conditional approval in an expedited way based on early-stage data. Typically NMPA will leave the homework in the issued license with respects to those unfinished necessary post-market clinical trials and/or post market performance follow-up and other studies. The expectation is that NMPA will request the Sponsor to complete these studies before the next renewal application.

– EUA: In view of the COVID-19 Pandemic, NMPA defines the Emergency Use Authorization (EUA) path in Order 739. At the request of the National Health Commission (NHC), and in response to public health emergencies, the NMPA can issue an EUA within a defined scope and period.

– LDT: Medical institutions will be allowed to use their lab-developed tests (LDTs) for their own clinical purposes if the clinical needs cannot be met by approved IVD reagents. The NMPA and NHC will jointly develop the actual rules of LDT in separate guidance.

– New Import Channel for Clinical and Urgently-Needed Devices: Medical institutions will be allowed to import Class 2 or Class 3 medical devices in small quantities. This will require a special import permit from the NMPA or NMPA-authorized local provincial MPA to meet urgent clinical needs.

As we have known it, NMPA has and will continue to strengthen post-market surveillance (PMS) in order to improve the supervision system and supervision efficiency. NMPA has also placed greater emphasis on the regulation of the complete product lifecycle; this has been reflected by more field inspectors at different levels.

Article 68 of Order 739 stipulates the establishment of a system for professional career inspectors. Article 69 brings the definition of expanded inspection and on-site inspections—these will not only be limited to the manufacturer site (R&D, manufacturing, distribution and usage). NMPA will expand the inspection to corresponding personnel as well as third parties, if needed. NMPA published the ‘Guidance on overseas inspection for Drugs and Devices’ on December 26, 2018 (NMPA No.101, 2018); this order specifies that overseas inspections do not apply only to the manufacturing site, but also to overseas R&D sites.

Article 38 of Order 739 stipulates a Unique Device Identification (UDI) phased implementation to assist with device data traceability in China. In order to implement General Secretary Xi Jing’s “Four Strictest” requirements on drug safety, one of the initiatives is to implement UDI to strengthen full lifecycle management and to improve supervision efficiency. Now, UDI has become the common language to solve global regulatory issues of medical devices.

Highlighted below are some important milestone achievements of UDI in China:

Order 739 imposes heavier penalties on violations for all medical device developer entities and key individuals for illegal acts. It also implements punishment measures to increase the cost of violations and drives serious offenders out of the market in the most extreme cases.

Order 739 also introduces personal liability on legal representatives, principal responsible persons, directly responsible supervisors or other personnel of MAHs. The illegal gains of these individuals during the period of illegal conduct can be confiscated. They will also receive an administrative fine of 30 percent to three times their income and a lifetime debarment from engaging in the medical device manufacturing and/or distribution of medical devices in the most serious cases.

With the recent deepening healthcare reform in China, new guidance and initiatives are expected to be released in the coming months. Such details can offer helpful insights and operation guidance to the IVD and medical device industries. In the interim, NMPA is determined to establish an increasing scientific and efficient approach to product reviews and approvals. Multinational companies operating in the life sciences space who are interested in the Chinese marketplace will need to pay close attention to keep up with rapid regulation changes to ensure continued compliance. More scientific and open legislation should bring more opportunities for multinational Sponsors to more efficiently access this marketplace.

How Can NAMSA Help?

NAMSA is the industry leader in driving successful regulatory outcomes through effective interactions with the NMPA and other APAC government authorities. NAMSA’s dedicated team of IVD and medical device specialists and scientists not only understand how to guide manufacturers through testing, clinical and regulatory requirements, but we also help Sponsors simplify the development and implementation of effective development strategies. Whether supporting IVD regulatory assessments and submissions, developing IVDR/MDR compliant technical files, designing and managing clinical trials or building ISO 13485:2016 and 21 CFR part 820 compliant quality systems… we’ve got you covered.

Learn more about our services: 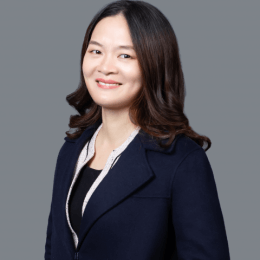 Lillian Li has been in the IVD industry for over 11 years with 10 years focused on IVD registration in China and one year as a CRA in the pharmaceutical industry. Lillian has rich experience in launching IVD products within the Chinese marketplace and is particularly strong with Chinese IVD regulations and supporting registration strategy for imported and local products. Ms. Li holds a Bachelor’s Degree in Biochemistry from China Pharmaceutical University and a Master’s Degree in Microbiology from the Third Institute of Oceanography, MNR.