On 10 January 2018, the EU Commission issued the document, “Notice to Stakeholders: Withdrawal of the United Kingdom and EU Rules in the Field of Industrial Products.” While this notice does not contain information previously unknown to the UK government and medical device sectors, it does emphasize the implications of the failure of the UK and EU to negotiate an appropriate agreement after the official Brexit date of 20 March 2019. Following this date, the UK will become a “third country” and no longer exist as a member of the EU.

The recent “Notice to Stakeholders” explains the outcome of a “hard Brexit” where no deal is achieved. It serves as a warning to manufacturers, including those in the medical device industry, to ensure that appropriate contingency plans are in place for such a scenario. However, this document should also be considered in the context of the negotiating position of the EU-27.

The likelihood of a “hard Brexit” outcome is uncertain given the UK’s negotiation position of “no deal is better than a bad deal,” and may seem unlikely for the following reasons:

*Note: Although a local office in mainland Europe may provide a manufacturer with their CE certificate, that certificate must be issued by a Notified Body legal entity. If a certificate displays a UK Notified Body number (i.e. Amtac 0473, BSi 0086, LRQA 0088, SGS 0120 or UL 0843) this “Notice to Stakeholders” very specifically pertains to your organization.

While negotiations are ongoing, there does remain a risk of the ‘worst case scenario’ being realized. It is recommended that all stakeholders evaluate risks related to supply chains, both for EU-27 and UK market access.

Below, NAMSA has provided recommendations for proper planning of EU-27 and UK market access activities to ensure preparedness.

In some cases, such as SGS 0120 and Amtac/Intertek 0473, these organizations have sister Notified Bodies in existence. Alternatively, others such as BSi, are applying for designation for a new Notified Body in mainland Europe. Even if sister Notified Bodies in mainland Europe have the appropriate designation scope and capability, the process of transfer is likely to be time-consuming and resource-intensive for all stakeholders; this includes changes to labelling and instructions for use as a result of a new CE mark number.

NAMSA, an industry leader in regulatory strategy consulting, is in current discussions with UK Notified Bodies to better understand the mechanics and critical timelines of the transfer of NAMSA clients to their sister Notified Bodies in mainland EU.

However, some manufacturers may not wish to utilize proposed mechanisms and prefer to move to another Notified Body outside of their existing relationship. It will be critical for UK Notified Bodies to create a seamless and least financially burdensome approach if they wish to ensure manufacturers maintain their commercial relationships with the larger organization. Agreeing to a revised contract and issuance of new certificates are unavoidable as part of moving to the sister notified body.

In the most likely scenario of UK becoming a “third country” independent of the EU, current EU distributors who previously supplied devices to mainland Europe (between the UK and EU mainland) will instantaneously be considered as Importers upon a “hard Brexit.” At this time, EU distributors must assume new regulatory responsibilities that are associated with this change in role.

One final point for consideration is that of the significant importance for both non-EU and EU-27 device manufacturers to have proper access to the UK market after Brexit. At this time, the regulatory model is unclear, but the likelihood of access being based on the MDR is high; therefore, manufacturers should continue their MDR transition plans with urgency given the deadline of MDR compliance of 26 May 2020.

How Will Recent EU Regulatory Changes Affect Your Organization?
NAMSA’s global regulatory experts welcome the opportunity to discuss strategic options related to the UK’s recent regulatory shifts. Our teams of EU professionals are available to assist with an in-depth assessment of potential business impacts to your manufacturing business and Notified Bodies/Authorized Representatives. Learn how a NAMSA-developed contingency plan for Brexit and the MDR can lead to organizational efficiencies and market success. Please contact us at: communications@namsa.com or +1-419-666-9455. 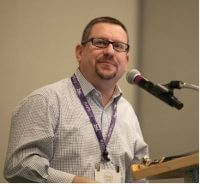 Adrian is Director of EMEA Consulting Services at NAMSA where he utilizes his broad experience of changing EU medical device regulatory requirements to support clients worldwide. He is responsible for new product development using EU regulatory requirements to provide a balanced interpretation of the needs and expectations of both competent authorities and manufacturers. He works with a broad range of devices including drug-device combination products. Adrian previously Head of Notified Body of SGS in the UK, and also served as the Global Clinical Affairs and Regulatory Manager for Medical Devices (SGS) with responsibility for conformity assessment activities of high-risk (Class III) devices under the Medical Devices Directive (MDD). In all, Adrian has 25 years’ experience in the medical device industry. He attended the School of Pharmacy at the University of London following and conducted postgraduate research in “Retinoid-Induced Skeletal Toxicity.” He also holds a diploma in “Managing Medical Product Innovation” from the Scandinavian International Management Institute.